There is a scene in Kaatru Veliyidai when Dr. Illyas (RJ Balaji’s character) is speaking to Nidhi (Rukmini Vijayakumar) and he asks her how Leela (Aditi Rao) is able to forgive someone as flawed as VC (Karthi) over and over again and manage to have limitless love for him. By the time that scene played out, I had already been squirming in my seat for over half an hour and was truly disconnected from the plot. So the question seemed like something I could stand up and ask the other 249 people in the hall that night. Only, it will not be about Leela but Mani himself. Why is it that we, his audience, continue to look forward and patronise his work, even when it has been many years since we last related to his narrative? I am sure it is not a simple answer.

Kaatru Veliyidai is an overwhelming sensory experience. Ravi Varman (true to his name) brings to us the most visually stunning piece of cinema made in this country in more than a decade, by some distance. But that is not new. Mani has always, almost compulsorily had that extraordinarily beautiful handwriting – cinematography, music or sound design. Except, it comes together in KV, better than ever. There is a scene where the two protagonists are standing next to a jeep on top of a hill, in momentary silence and I would be lying if I told you I did not feel the gush of a cold mountain breeze and shiver a little inside the Chennai theatre. Aditi (aided beautifully by Krithika Nelson’s exquisite dubbing), shines through in a surprisingly impactful performance by a female protagonist. Surprising as they together pull off the ‘looking lost in love’ and ‘sounding lost in love’, with extraordinary authenticity. The scene in which she is humming while making tea for her grandfather and then stepping out at the sound of a fighter jet whizzing past is sublime.

The one who seems completely out of touch though is the writer himself. The mind that penned films that eventually became pop culture for an entire civilisation, seems to struggle to connect anymore. Not with a different generation, but the one that knows him intimately as a creator. He has always erred on the side of brevity when it comes to dialogues and his characters have mostly been comfortable switching between their native slang and poetic Tamil. This streak in them has mostly been for the effect, for a great one liner that heightens a scene, rather than something that is organic and native to the character itself. And we have always enjoyed that. The prospect of an auteur presenting world class cinema to us, rooted so much in our sensibilities has always been exhilarating and we have lapped it up instantly. And proudly.

However, Tamil cinema has moved on. We are bang in the middle of a unique revolution, one where we have willingly traded aesthetics for the rough edges and compromised poetry for authenticity. It is the age of Kumararaja and Vijay Sethupathi. One where the school of Mahendran has already married that of Mani Ratnam and Balachander has already stepped out onto the fields with Bharathiraja. So no, we cannot relate to a Hero who yells ‘kaatru veliyidai kannamma’ from a mountain top or calls his girlfriend “chella kili” or a character referring to her friend’s love by saying ‘avalukku avar mela oru kannu’. It breaks the spell and if you try, you can hear people shifting in their chairs. It is probably blasphemy, but I have often wondered this week if KV would have resonated better as a film with someone else’s lines.

But it is also among the writer’s best.

In between the unreal lines is a real, significant departure. There is an extraordinary scene in the film when Leela and VC fight over a snow storm – a fight between rationale and romance. This one scene is the film in itself. It is also screen writing at its best.

While Mani is not new to a flawed male protagonist, he has very rarely dived this deep. While Velu Nayakkar or Lallan or Mouna Raagam’s Divya are all flawed, we rooted for them. Much like Brando’s legendary ‘Stanley’ from ‘A Street Car Named Desire’ – a film that is an obvious influence in many of Mani’s leading men. But not this man. Mani’s VC is a case study and I would pay to buy a book on him. And so is his Leela. Flawed in her naivety.  While flawed protagonists by themselves are not ground breaking, what is new is that the love itself is mis-shaped. It is the real Kargil in the script – one fraught with landmines and one that shouldn’t exist.  In a land of stories where Love is above all else, this is a beautiful departure. And for a writer / director who has always been comfortable on the surface of any issue, this is significant. One just wishes that we could have cared about these two people more in the couple of hours we spent with them. 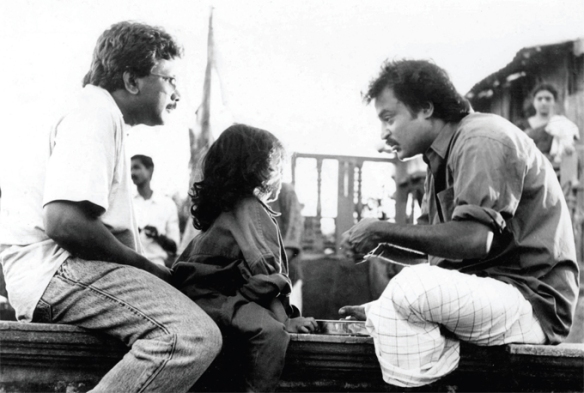 Which brings me to the craft.

While it is evident that Mani Ratnam’s audience don’t connect with his stories any more, the reason for this ironically seems to be the director actually trying to better himself as a story teller. Exhibit A: In Baradwaj Rangan’s recent book, Mani talks at length about his thought process during the making of Guru: “…you have to, without being hurried and you also have to move in chunks. You cannot have a lot of moments and rush through each of them. Ten years back, may be…..it is better to choose the right ones and linger on them….If we can get it in one simple emotional moment, then it seems enough instead of dwelling…”. There is enough evidence in his last three films to suggest that he is moving towards more “efficiency” in story telling. In this effort to create tighter narratives, I wonder if somehow the soul has been subconsciously traded.

I left the theatre after watching KV, with a sense of longing. Like being unable to relate to your childhood friend anymore. With each passing film, the director and writer that I grew up with, whose work I used to long for, seems to matter less and less. But like with all relationships, I guess we will continue to look forward. Clearly, nothing else explaing the packed theatres on a weekday night in a Chennai suburb. By the time the next release happens, I am sure the Leela in me would have forgiven my VC – my man from Venus Colony!