So the other day, I was walking from my home in Mylapore towards the beach. It was early in the morning – a time when Chennai is always at its glorious best , untouched by the stress of the day ahead. Never one to disappoint with its beauty, ugliness or irony, it offered me multiple stories, which like any other day, I recorded on my social stream. There was the beach that caught a bad case of Ganesh:

Your ganesh is fucking with my beach pic.twitter.com/E2g6iWm9d7

The Cooum in all her glory: 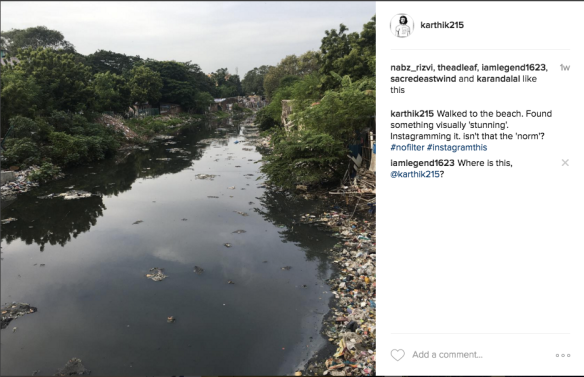 And then this restaurant that caught my attention, for various reasons. 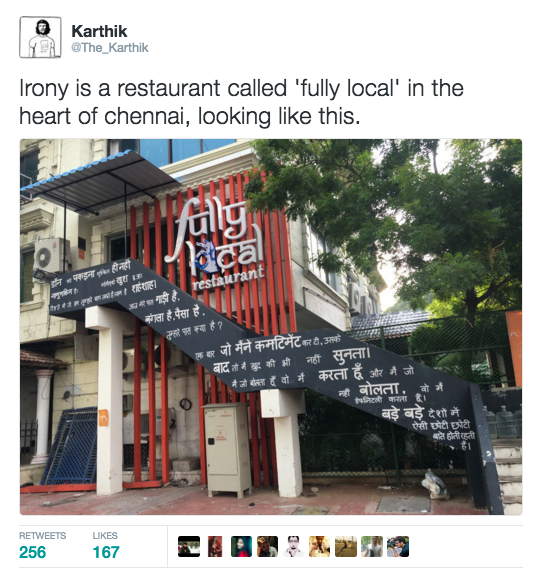 Now, thats where it all began. But we will get to that in a bit.

Why did I share it? I liked the irony and the juxtaposition.

Was that a judgement on the establishment? Hardly. It had the same motive as this other tweet, where I enjoyed an effort to rhyme:

Because some time, you just have to rhyme! pic.twitter.com/75Sv6O20Lr

Was it a commentary on my language affiliations? No. I love my mother tongue but I write in 4 languages and I paid money to learn three of them. I am in love with words and I wish I could learn more.

Was I propagating regionalism? Nope. I have not lived in my home town for close to 2 decades and I am in love with the city that I call home now.

So it was just a tweet like any of the other 7705 I had typed earlier. But I guess this one unfortunately struck a chord. And good number of you Retweeted it. More unfortunately, it started getting misinterpreted. Not just the original tweet, but others’ sarcasm as well. Like this one: 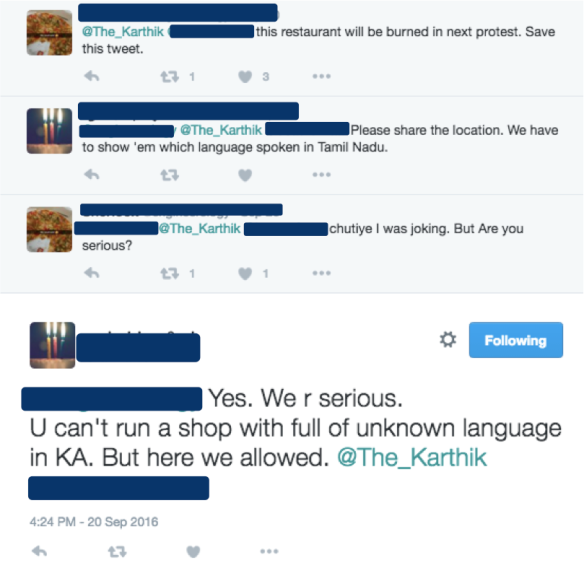 Now, I deal with social media for a living and I am familiar with negativity having a higher velocity than its counterpart but this got a bit out of hand. WAY out of hand. And I am as much guilty as anybody else for having caused it (even though I have the right to express myself). While I am not sure why this particular tweet caught everybody’s fancy (I wish my Ganesh beach tweet had met even half this enthusiasm!), it did eventually become a problem and hence needed to be removed.

The people behind this establishment have put in a lot of heart into creating this place and I am sure they have wonderful plans to market it. One look at their Zomato page tells you so much about the love that has gone into building this place. An unintended tweet has caused them a lot of pain and made them feel unwelcome. How about we change that? How about we do the reverse of what a MOB does? Can we help rebuild a bit of what we might have destroyed? If you are in Chennai, why dont you visit this restaurant, enjoy their hospitality and let the world know by tweeting with #Supportnotdiscourage ? Hell, I know Mylapore can use a good Parantha 🙂 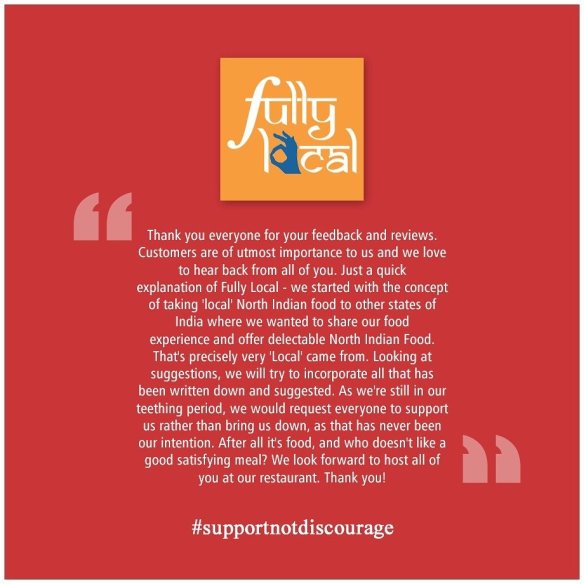