Weekends in the 80s were worth looking forward to for a few reasons – The prospect of He-Man on Sunday morning TV, followed by episodes of Mahabharat and ‘Fairy Tale Theatre’; The hope of a long session of underarm cricket on the road in front; Weather permitting, even an hour or two on a bicycle hired by the hour. But nothing had us more excited than Dad coming home from work, carrying new issues of Amar Chitra Katha. The prospect of being transported to a whole new world through those colourful, graphic pages was and still remains overwhelming.
I have not known a childhood without ACK. So for me, it has been a grand parent, an encyclopedia, a friend and an oracle, all rolled into one! Those pages always had a way of breaking down profound revolutions, complex epics and mythological mysteries into simple rectangles of conversations that you would always understand and always remember.
Stacks of ACK was pure currency for a kid in the 80s. Worth much more than a pile of Enid Blyton or Hardy Boys or even notes from the science class. And definitely more trade-able than any of them. And come vacation, the most painful bit was to split your stack with your sibling. Of course in my case, it always helped to have a sister whose taste did not overlap with mine – mostly. She chose the Panchatantras and stories of Kings, while I chose the Mahabharata and the freedom fighters biographies. It of course never mattered that both of us have read every single comic, five times over. So the real fight was over the one thing that we both loved – The Jataka Tales. And till date, my favourite issue remains the fascinating tale of the entrepreneur who started off with a dead mouse. 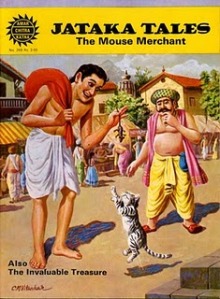 Today, it pains my heart to see these books selling more as collector’s items for thousands of rupees, in fancy bookstores, way out of the reach of a majority of this nation’s kids. May be it is time to create a phone app to take it back to the masses? Or publish it in major newspaper publications as comic strips, in place of ‘Beetle Bailey’ or ‘Peanuts’? Are you listening, India Book House?
It was only when news of Uncle Pai’s death came out last week, that the enormity of what he has achieved finally dawned on me after all these years. On Twitter, I found people from three different generations recalling their childhoods memories reading ACK and Tinkle. How amazing is that? Three generations, whose knowledge of most-things-Indian, coming from the same source – a comic. I guess this tweet by Anand Ramachandran sums it all up for the rest of us.

2 thoughts on “of kings, freedom fighters and childhoods”